Easter Reflection on the Year of Two Popes 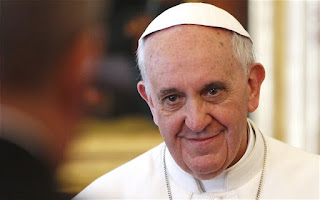 Since I posted last, Benedict retired and Francis was elected.  As in previous posts about Benedict, I believe he was step forward from John Paul II.  He was much more willing to dialogue (e.g., with H. Kung) and allow for a bigger Catholic Church than JPII.  Nonetheless, his greatest contribution to the modern Church may be his resignation.  There is a popular theory that he resigned because the Vatican Curia was out of his control.  Who knows... In any case, having two popes at the same time (in a sense) causes some of the mystique the papacy to fade.  For many conservatives, the Pope is the direct conduit of the Holy Spirit.  Does the Holy Spirit get confused when there are two popes?  Benedict obviously did not believe this to the extent that many arch-conservatives do, for he published books under this baptismal name--an action not done by JPII.

A little bit on Francis.  I'm sure I'll disagree with some of his future pronouncements, but so far he has been a great breath of fresh air.  I would like to think that the Catholic Wintertime in Milwaukee is experiencing an early spring thaw, but I'm not naive.  Nonetheless, his emphasis as the Bishop of Rome (as opposed to the Pope) has been nice.  It expresses a greater sense of collegiality with his brother and sister bishops.  His washing of not only women's feet, but a Muslim woman's feet during Holy Thursday was great.  He broke with a Roman custom that stressed Holy Thursday as Jesus founding the priesthood.  By not washing the feet of twelve priests, he reminded the Church that Holy Thursday is about service and being the least one.  His simple living is another great attribute.  I await his next scandal.

I'll check in from time to time.  Feel free to leave comments.

Hello reader.  I just wanted to give an update.  It's been over six months since my last post.  I'm still an avid Catholic who feels strongly about all the issues I've written about, but I'm taking a break.  Other than breaking news, I feel that I've addressed all the biblical, historical, systematic, and moral issues of utmost importance in previous blog posts.  In that sense, it's like I've written a book and using the search feature one can locate just about any pressing Catholic issue.  I do plan on returning at some point and appreciate all the hits that this blog continues to receive (over 500 hits a month).  Peace to you all!!! And Merry Christmas. 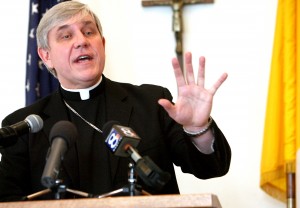 On the Archdiocesan blog, Milwaukee Archbishop Jerome Listecki has recently posted two entries concerning the U.S. bishops Fortnight for Freedom initiative.  Basically, the bishops are trying to raise awareness about religious freedom during the two weeks leading up to the Fourth of July.  When the bishops first announced this initiative, they mentioned two issues in particular: the contraception mandate and the rights of immigrants.  The bishops obviously chose these two topics so that they would not appear to be only bashing Democrats.

As can be expected from his previous comments against unions, Listecki is using the Fortnight to focus solely on abortion and contraception.  Regarding the bishops' focus on immigrant rights, Listecki is silent.  Considering that Obama just published a new immigration mandate, the Supreme Court ruled on Arizona's immigration law, and Palermo Pizza's largely immigrant work force is striking and trying to form a union, it is strange that Listecki has not commented on any of these issues.

There is, of course, one strong reason he has left immigrant issues out of his statements.  He is a Republican who does not want to support any Democratic initiative even when it is supported by papal teaching.  I hope that Listecki proves me wrong, but so far his words and actions have spoken for themselves.

Morlino Threatens to Keep Sacraments from the Disobedient 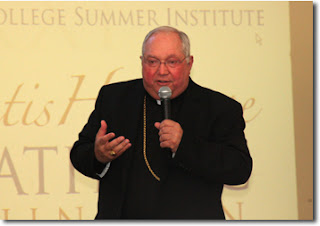 Madison Bishop Robert Morlino, who is known for his active conservatism, is threatening the use of formal warning and interdict.  An interdict would allow someone to still be Catholic while refusing that person the sacraments.  An initial warning from Morlino came about in response to about 40% of the parishioner of St. Mary's in Platteville, WI (or roughly 1,200 members) signing a petition for the removal for their priests.  Their priests, Fr. Faustino Ruiz and Fr. John Del Priore, are members of the Society of Christ Jesus the Priest who brought abrupt conservative changes to the parish, such as: no altar girls, no lay eucharistic ministers, and an emphasis on conservative doctrine over pastoral activity.  In addition to the petition, the many parishioners, who do not feel the priests respects their legitimate opinions and rubrics for worship, have either cut back or refused to contribute financially to the parish.  This action has resulted in the recent closing of the parish school.

To be fair, the letter, which can be seen here, was sent to parishioners on the pretext of the school closing.  Nevertheless, Morlino is using the letter to show his support of the priests and disapproval of certain parishioners. The main text does not threaten the parishioners, but there are two added pages of texts for reflection that include multiple canon law passages concerning penalties for parishioners who misbehave in the eyes of the bishop.

Although Morlino rightly states that the priests have not violated any protocols or the teachings of Vatican II according to the letter of the law, they have most definitely violated the spirit of Vatican II.  The Council pushed for the greater inclusion of lay participation in the life of the church--a participation that Morlino and his favored priests wish to restrict to the greatest possible degree.  Now that the parish has spoken with its wallet, he adds passive aggressive texts to the end of a letter to try and put them in their place.  I know the Milwaukee Archdiocese has its share of problems, but my heart really goes out to those good Catholics in Platteville.
Posted by Faithful Catholic at 2:35 PM 2 comments: 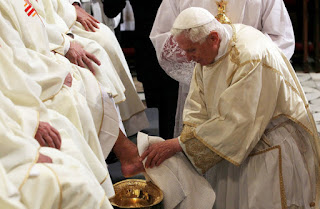 Pope Benedict used Holy Thursday to denounce the Pfarrer Initiative, which is a group of about 300 priests in Austria openly support the inclusion of female and married priests.  I posted a short entry about this group last year, though they have been around since 2006.  The group has put out a "Call to Disobedience," which encourages parishes to let women preach and for a lay person to celebrate Eucharist when no priest is available.  They are opposed to any parish closing because of the priest shortage.  The Austrian bishops have not imposed any penalty on these priests as of yet and in January their bishops met with Vatican officials to discuss the group.


Benedict chided the group for encouraging change in the church through disobedience and for putting their own preferences and ideas before that of Christ.  Especially on this last point, Benedict is completely wrong.  These priests are risking their own livelihoods to proclaim a message that they feel has been delivered to them by the Spirit--and for that they should be commended.  Disobedience in the church is tricky business, but so is closing church doors for lack of priests.  Real change in church and society only comes about from sacrifice and being a pain in the neck.  On this Triduum weekend, I thank these Austrian priests for their courage and perseverance in asking the bishops to respect the call to the priesthood received by women and married persons.

Listecki Turns Agasint Labor... and Shows he is a Republican 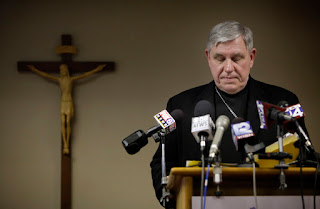 Archbishop Jerome Listecki talked politics recently with the news people of Channel 6 in Milwaukee  Last year, after Walker introduced his plan to get rid of collective bargaining for public unions, Listecki issued a letter about the need to protect unions.  Now he is backpedaling.  Word on the street is that he got a lot of flack from conservative and wealthy Catholics regarding his letter last year.  In this recent interview, he admires Walker for doing what he thinks is right, though time will tell.  That's simply throwing  union workers under the bus.  He admits that a recall is valid for a politician if they do something morally detrimental.  Obviously, trouncing on workers' rights does not count.  Now if you are talking about Democrats such as Obama and Nancy Pelosi - he has multiple attacks and critiques. In fact, some their actions cannot stand.

He denies being a Republican or Democrat... he's a Catholic.  But in his interview he attacks the ideas of Democrats and respects ideas of Republicans that clearly defy Catholic teaching, but... "time will tell."  To try and and save face, he goes on at length about his worker background in Chicago.  While that may be true, that was a long time ago.  He is no longer blue collar - he's a land speculator.

Archbishop Listecki,  We need to support working families so that they will be less inclined to be tempted by the sin of abortion, which you view as the greatest evil of the day.  Living in the Milwaukee area, it might be nice to add racism as a sin from time to time.  Racism in a major issue for Milwaukee that even the Cardinal of New York mentions it from time to time.

Tomorrow's reading from James has him telling his readers:

"Are not the rich oppressing you?
And do they themselves not haul you off to court?
Is it not they who blaspheme the noble name that was invoked over you?"

Now James does not say the Church should abandon the rich.  But woe to the rich.  Archbishop, do not forget to save some harsh words for them and perhaps your own portfolio.